NEW YEAR'S EVE
YourWorld invites you to join us as we welcome in the new year in Salvador, Bahia-Brazil; Land of Happiness. Dressed in white and bearing gifts of flowers and perfume, each year, thousands of people sojourn to the beach and make their offering to Yemanja, Brazil's patron deity of the sea.

Set on the seaside, near the island's eastern tip, Santiago de Cuba is the country's second-largest city. Vibrant, tropical, and often sweltering, Santiago is the country's liveliest cultural showpiece, outside of Havana. With a population just under a half-million people, Santiago is a world apart, with a unique history and rhythms all its own. The city has produced some of Cuba's greatest contemporary musicians as well as several of its most stalwart revolutionaries, and it has served as the stage for some of the most storied events in Cuba's modern history. As the capital of the old Oriente province, it has the largest Afro-Cuban population in Cuba and a resolutely Afro-Caribbean feel that distinguishes it from the rest of Cuba.

São Luis
São Luis, Maranhão is one of the most important Afro-Brazilian cities in Brazil, together with Salvador and Rio de Janeiro. With one of Brazil's largest black populations, Sao Luis also offers one of the nation's few museums dedicated to black history and culture. In a former slave-market building, the museum displays implements from the slavery era and photographs and drums from Maranhao State's Afro-Brazilian religion.

Our Experience Makes the Difference in Yours

YourWorld Consultant Group individually designs each of its tours for those groups, families and individuals, who desire a unique travel experience. Salvador, the Capital of Bahia, and one of the most fascinating destinations in all of South America, offers a rich and diversified African-centered experience. It has become one of YourWorld's primary markets. Although African Heritage is the centerpiece of our programs in Brazil, we have other traditional tourist sites in our travel itineraries. We can take you to Iguaçu Falls in the south of Brazil. How about a Cruise on the Amazon or a ride along the Marriage of the Rivers in Manaus? What would a trip to Brazil be without a visit to the Corcovado (Christ Statue) and Sugarloaf Mountain in Rio de Janeiro?

If you are contemplating taking a trip to Brazil or Cuba contact us today, and together, let us help make your visit a memorable one.

The city and province are considered by many to be the fuente (fountain) or cuna (cradle) of the Afro Cuban religious traditions. Many Santeros in Matanzas practice several of the African religions, which were passed on to them by their parents and grandparents whose ancestors came from different parts of Africa. They see each religion as having its time and place, but ultimately they are worshipping one God, no matter the name or the language used in that worship.Matanzas is called the City of Bridges, for the seventeen bridges that cross the three rivers that traverse the city (Rio Yumuri, San Juan, and Canimar). For this reason it was referred to as the "Venice of Cuba." It was also called "La Atenas de Cuba" ("The Athens of Cuba") for its poets.Matanzas is known as the birthplace of the music and dance traditions danzón and rumba.

We're specialists in custom designed tours to Brazil and Cuba

Manus is the capital of the state of Amazonas, it is a vibrant, exciting city filled with warm, happy, friendly, fun loving people that make extending your stay before or after your Amazon trip worthwhile. It even deserves trip of its own.

A unique destination and one of the most famous cities in the world, Havana is a living time capsule of times past, from its Spanish colonial history to the enduring legacy of the Revolution. An intensely atmospheric city, it contains some superb architectural gems and many other cultural and historical sights. Havaneros (natives of Havana) love their city and it's not difficult to see the reasons. Amid the warm crystalline waters of the sparkling Caribbean, over five hundred years of roller-coaster history have conspired to create one of Latin America's most electric and culturally unique societies. Havana is a one-of-a-kind city. As the Caribbean's largest and most vivacious metropolitan areas, its romantic atmosphere and infectious energy are the stuff of legend.

​​In Bahia, Africa abounds. Salvador is the most African of the Brazilian cities with up to eighty percent of its population of over two million people having African origins. The local cuisine, music and dance forms and its extremely vibrant visual arts traditions are all testaments to this permeating African influence.

​RIO de JANEIRO - MARVELOUS RIO
Brazilians of African origin comprise nearly 60 percent of the total population of Brazil. It is estimated that nearly 4 million Africans were shipped to Brazil. By the eighteenth century, the majority of Rio's inhabitants were indigenous Africans. As a result, virtually nothing in Rio remained untouched by African customs, beliefs and behavior – a state of affairs that clearly influences today's city too, with its mixture of Afro-Brazilian music, spiritualist cults and cuisine. Brazil’s colonizers, unlike colonizers in the United States, allowed indigenous Africans to continue to use their drums.  Thus began the rhythm of the saints, the samba, and it explains why Brazilian "batucadas" (drumming rhythm and dance) reign unequaled today. 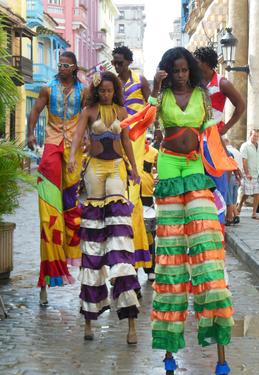 Sisterhood of the Boa Morte (Good Death) is the oldest organization for women of African descent in the New World. The Boa Morte Sisterhood is a secret society of African-Brazilian women, all descendants of African slaves, who sponsor a procession each August that parades through the streets of the historical city of Cachoeira on the banks of the Paraguacu River. It is perhaps the most important festival in the African Heritage calendar in Bahia and is a living tribute of African culture and Diaspora to the New World.