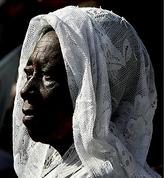 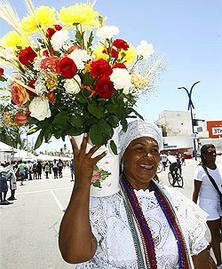 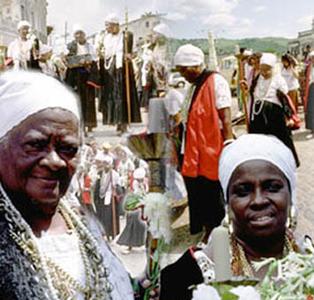 AFRICAN PRESENCE
Brazil has the largest population of African descendants outside the continent of Africa. Bahia is known as "The Black State". Salvador, the capital city of Bahia, which was also the first capital of Brazil, is known as "The African Soul of Brazil".  Bahia is also home of the Boa Morte Sisterhood. Boa Morte is the oldest organization of women of African descent in the New World. Meet the Boa Morte at their annual procession  held each August that parades through the streets of the historical city of Cachoeira on the banks of the Paraguacu River. 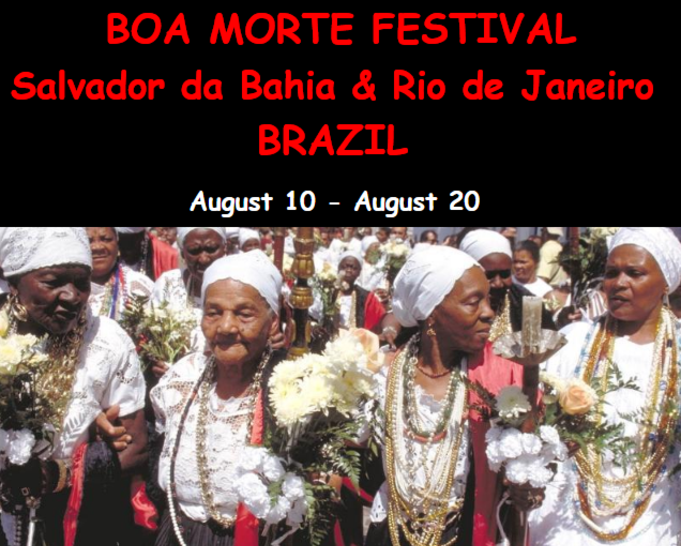 Festivals Of The Northeast

IRMANDADE DA BOA MORTE
The history of the Irmandade da Boa Morte (Sisterhood of the Good Death), a religious confraternity devoted to theAssumption of the Virgin, is part of the history of mass importation of blacks from the African coast to the cane-growing Reconcavo region of Bahia. Beautiful towns were built in thisarea, one of them being Cachoeira, which was the second most important economic center in Bahia for three centuries. In a patriarchal society marked by racial and ethnic differences, the confraternity is made up exclusively of black women, which gives this Afro-Catholic manifestation - as some consider it - a significant role in the annals of African Diaspora history. Besides the gender and race of the confraternity's members, their status as former slaves and descendants of slaves is an important social characteristic without which it would be difficult to understand many aspects of the confraternity's religious commitments. The descendants of former slaves have demonstrated enormous adroitness in worshiping in the religion of those in power without letting go of their ancestral beliefs of Candomblé and Orixás, as well as in the ways they defend the interests of their followers and represent them socially and politically.

SALVADOR DA BAHIA
Salvador is the capital of Bahia, a historical and magical place on the eastern coast of Brazil--an enchanting center of food, crafts, lush beaches, colonial architecture and effervescent population whose African heritage shows strongly in their culture and their lives. It was in Bahia that Brazil first developed, became rich, and blossomed as a country. Bahia is the place which better describes Brazil, for it brings in its people, its environment and in its soul, reflections of history and of the most authentic African culture. Bahia is the heart of Brazil. Bahia lives the happiness, magic and sensuality of its people. A land that lives in the mystery and cultural wealth from the art of capoeira, the songs of the fishermen, the candomble, smiles, sweetness, intelligence, friendliness, the taste for life and so many other beautiful things.

RIO DE JANEIRO
Brazilians of African origin comprise nearly 60 percent of the total population of Brazil. It is estimated that nearly 4 million Africans were shipped to Brazil. By the eighteenth century, the majority of Rio's inhabitants were Africans. As a result, virtually nothing in Rio remained untouched by African customs, beliefs and behavior - a state of affairs that clearly influences today's city, with its mixture of Afro-Brazilian music, spiritualist religions and local cuisine. Portuguese colonizers, unlike colonizers in the United States, allowed Africans to continue to use their drums.  Thus began the rhythm of the saints, the samba, and it explains why Brazilian "batucadas" reign unequaled today.

The Samba is a genre of music and dance. It is the most popular and well-known musical genre to come out of the African-Brazilian experience. It is a very percussive, energetic form of music. The escolas de samba, the large community based samba groups, have occasional similarities to the dynamics of marching bands, but, the similarities end there. Samba is a full-fledged musical form intended for dancing, not marching. It's rhythmically unique and culturally vital to Rio de Janeiro and other parts of Brazil. Like many music and dance genres, the samba's roots are African. Groups of neighbors in poor Rio neighborhoods played the music together to sing and dance and soon adapted the style to become part of their yearly carnival celebration. Brazil got "the samba", and the U.S. got "the blues". 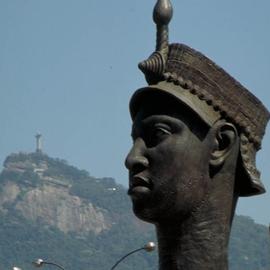